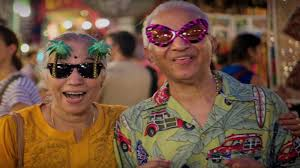 04 Tue 10.15 A.M
My Fortune
10, Cathedral Road
Chennai 600 086 Current Events / Music & Perfroming Arts
All the world’s a stage!
The phenomenal Padma Bhushan awardee couple The Dhananjayans have a glorious six decade experience in Bharatanatyam. They have been recognized by various bodies for their outstanding contribution towards preservation and popularization of Bharatanatyam through their premier dance school Bharatakalanjali. Their passion is dancing. However, come meet the “cool couple” in their new avatar as Asha and Bala in the recent Vodafone Supernet 4G campaign – which was aired throughout the IPL season and brought them
unexpected fame. They zoomed on a motorbike in Goa, got a tattoo….
Let us hear them to know if acting in the advertisement is an extension of  their dancing skills or have they left their comfort zone to explore a new adventurous avenue.
Posted by IWA CHENNAI No comments:

11 Tue 10.15 A.M
The Folly, Amethyst
Whites Road
Next to Corporation Bank
Royapettah, Chennai 600 014
A Jungle Journey
From being a local Chennai boy to becoming a naturalist in the jungles of Central India, the journey of Surya Ramachandran has been a fascinating one. After graduating from engineering, a tour in the Satpura Tiger Reserve changed his life and led him to follow his passion for wildlife and become a full time naturalist. His interests expand to all types of life forms, especially the lesser fauna of the region and their micro habitats. His enthusiasm led to
pioneering Central India’s first walking safari, canoeing, wilderness camping and night rides at Satpura. Later, Surya moved to Kanha where he co-authored his unique book titled Photographic field guide Wildlife of Central India with
David Raju.
Join us for a firsthand encounter of Central India’s rich flora and fauna with Surya Ramachandran.
Posted by IWA CHENNAI No comments:

13 Thu 10.15 A.M
The Folly, Amethyst
Whites Road
Next to Corporation Bank
Royapettah, Chennai 600 014
For the love of Baking and Dessert making!
From home baker to published author, our very own IWA Past President Achu Kurian’s desserts are making news. Born into a family of food lovers, she began following her mother around the kitchen from a very young age and never let go of this love for food.
Achu Kurian's thirty years of experience in this field and her love for food and cooking has evolved into the recently published wonderful book Cakes,Desserts & More with a wide range of recipes.
What better way to start this IWA year than on a sweet note with a baking demonstration from the Master Chef herself!
Come, savour these delicious treats in person.

18 Tue 10.15 A.M
The Folly, Amethyst
Whites Road
Next to Corporation Bank
Royapettah, Chennai 600 014
A Brief History of the Dravidian Movement
Dr Palanivel Thiagarajan, MLA (Madurai Central), is a 4th generation member of the Century-Old Dravidian movement. A former Engineer, Consultant, Derivatives Trader and Investment Banker he will touch upon the movement’s Economic, Religious and Social principles and policies and their evolution over the past century. Currently he has taken part in several debates in the Tamil Nadu Assembly proceedings noticeably the one on the budget. Discover facts that will shed light on the Dravidian Movement.
Posted by IWA CHENNAI No comments:

20 Thu 11.00 A.M
The Folly, Amethyst
Whites Road
Next to Corporation Bank
Royapettah, Chennai 600 014
“Eid Mubarak “
Eid – a time to look up and enjoy the magnificence of the moon, to experience the essence of the bounties of Allah, a time to bend in prayer for the betterment of mankind and to enjoy the sweet fragrance of the happiness that only friends and family can bring.
We invite you to join us in celebrating this beautiful and blessed ‘Eid’! May this, once again, bring us together to share our love, strengthen our bonds of friendship, remind us to give praise for all our blessings and above all for peace on this earth.


This is a members only meeting.
Posted by IWA CHENNAI No comments:

25 Tue 10.30 A.M
Crowne Plaza Chennai
Adyar Park
132, TTK Road, Alwarpet
Chennai 600 018
‘From a little acorn, a mighty oak grows…’ the seed to this mighty oak was sown on the 25th of July 1986 by seven visionary ladies – Nirmal Seshadri, Nancy Dean, Lakshmi Padmanabhan, Saroja Ramamrutham, Sunita Sahaney, Anneliese Hazari and Reva Singh. Their vision is what IWA is today - an eclectic organisation of distinction and fame.
On this legendary day let us honour our Founders and all our Past Presidents who initiated and developed this marvellous association with fun and revelry in the true spirit of bonhomie followed by lunch.
Come dressed in your favourite shades of pink.

This is a members only meeting.
Posted by IWA CHENNAI No comments:

27 Thu 10.15 A.M
The Folly, Amethyst
Whites Road
Next to Corporation Bank
Royapettah, Chennai 600 014
Date with the Stars!
A morning with M.S. Shivakumar who researches and practises astrology as his passion, and also is a Learning and Development professional. He has served at the top level in L&D department of Fortune 500 companies across the globe. An astrologer by choice much sought after by our Bollywood and Kollywood stars. He strongly believes that the principle of astrology is to “Make things happen”
rather than “Watch things happen”. Make use of astrology as a tool ,such that it provides guidance to maximize growth and success and minimise loss or distress. It helps you to be at the right place at the the right time with the right people, with the right health and the right intention, guided by the right Guru or God Almighty.
Posted by IWA CHENNAI No comments:

Happy New Year and Happy Pongal from all of us on the committee!We had so much fun at our “Merry Little Christmas Party,” and we would like to thank all the members for participating in the festivities. Christmas songs will now pale in comparison to our variations and renditions!

A familiar New Year’s tradition is creating intentions to improve ourselves, also known as the New Year’s Resolution. The most common resolution relates to health. Did you know that many studies are expounding on the benefits of friendship upon health? Perhaps that means attending IWA meetings are beneficial to our health.

We start 2020 with our “Welcome Back Get-Together,” a chance to catch up after the holidays and become healthier.

This month, we aim to release the updated version of the IWA telephone directory. It will be available for purchase during IWA meetings.

We hope you enjoyed the meetings in 2019. Many more fascinating events are coming up in 2020.

Its heartening to note that more and more members are using the blog.You can even comment about the blog or the meetings in the comments section.

Go Digital and use the electronic medium to the fullest.